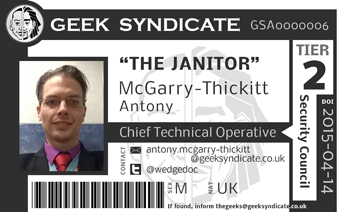 I am a card carrying geek. Almost literally, in the case of my work over at Geek Syndicate. For the 2012 SFX Weekender, myself and fellow site contributors all wore badges. A competition was run to see who could "Catch Us All" which was fun. My interests generally veer into the traditional geek territory but I would also say I’m a geek about my other interests as well.

What is a Geek?

You see, to me, the term geek simply means expressing an enthusiastic enjoyment of a subject or activity. Usually, a certain amount of knowledge in that area is implied – though I would say it’s more about the enjoyment and enthusiasm. It’s quite possible for a “geek” to be enthusiastically wrong! The content of said subject (or activity) is irrelevant. It could be enjoyment of a soap opera or reality television show. The works of a certain author could be embedded in a person’s brain so that they almost don’t need to read the books any more. Frankly, any mountaineer who isn’t enthusiastic and knowledgable about that sport should probably quit while they are ahead. And uninjured.

There are as many (if not more) football geeks in the UK as there are super hero geeks. People who can real off facts and statistics about their chosen team(s) and the players. I remember smiling when Rick Stein (one of my favourite television chefs) called himself a “food geek” in one of his programs. I confess I can’t remember which series or episode it was. That moment confirmed what had always come over to me in his programs: His enthusiasm and knowledge of food and the creation of recipes resonated with the geek in me. Being a geek is something to be proud of. Like Rick (and millions of others) I revel in my geekness!

So what do I consider to be my areas of geekdom? What am I a full-blown geek about? There are quite a few areas really, but I think the main handful of areas are:

There are many others, some of which will come to light in the posts of this blog I am sure.