In Role of Honor, 007 is discharged from the Secret Intelligence Service and  is courted by an organisation being paid by SPECTRE to commit an act of aggression against the Western powers. The novel is centred around crimes and acts of terror being planned and executed with split-second timing thanks to new computerised simulators being used by the perpetrators. Bond learns the ins and outs of programming before being sent to infiltrate that organisation. Intrigue, duplicity and wargames abound in this novel before its mid-air finale on the Goodyear blimp.

I struggled for a long time coming up with a concept for this cover. I wanted to get over the idea of this early concept of cyber-crime in some way while making sure people picking up the book would know it was an action-thriller. Having used the more 1980s style terminal font just two covers ago on For Special Services, I’d created a bit of a dilemma. Two action set pieces stand in my memory of this book. The first is a scene where Bond is taken to a training camp to prove his worth. The second – the finale on the Goodyear Blimp over Switzerland.

I decided – as had previous cover designers – to bring the Blimp as a key element of the cover. Since this is a personal project, I decided that using an image of the actual company’s blimp would be acceptable. However, I didn’t want a photo-realistic version. After finding a creative common licence photo, I ran it through some artistic filters to try and blur the fact that the actual Goodyear blimp was used here.

To add an action element, I found a great explosion under creative commons licence, duplicated it and adjusted the two copies to an arrangement that I liked and again ran some filters to create a “painted” effect.

For the title, I found a free-for-personal-use digital font which added a digital element without looking to similar to my For Special Services cover. I decided to use the colours from the blimp throughout, so the background became a shade of blue with the title in yellow.

As an added attempt to suggest computer based activities, I decided to add a binary stream to the background in the same digital font as the title. 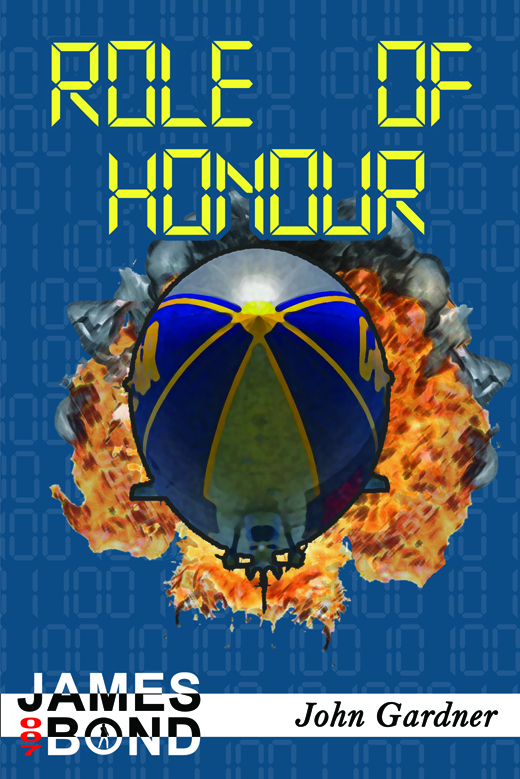 The back and spine retain the background blue from the front. Whilst repeating the binary pattern on the back cover, I decided that it would make the spine look somewhat cluttered and so I left that element off.

The background blue meant that I could use white as the primary text colour for the blurb, using the yellow from the title font to highlight key words within it. The same yellow was used for the quote taken from The Listener. I decided to keep to the BELL MT font used for the author information on the cover and used the digital font for the periodical being quoted’s name.

Since the only real visual element on the front cover was the blimp, I brought this over to the spine – sans explosion.

It is only since exporting the cover and uploading it to my various galleries online that I noticed I had somehow managed to mix up the information bar on the spine – it has a black background rather than white as the rest of the cover does. I have decided not to correct this mistake as I don’t think it is too great an issue! 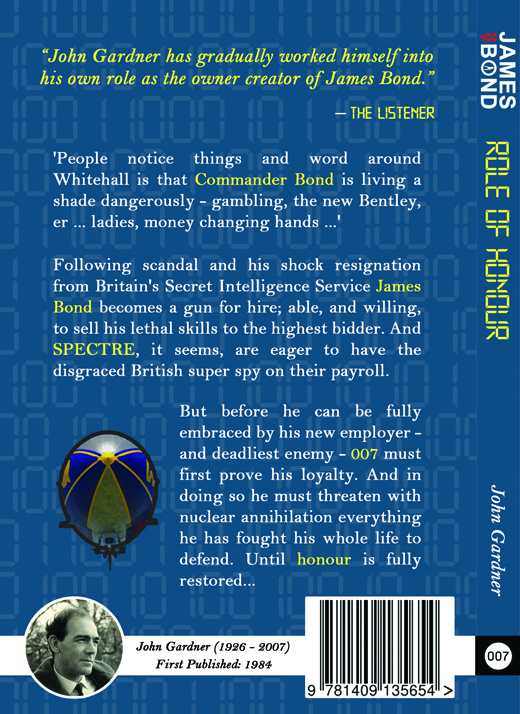 I quite like this cover, even though I don’t think it fully captures the novel’s contents. I think the blimp heading away from the explosion works to draw the attention and am fond of the blue and yellow colour scheme. I do wish I’d have been cleverer though and managed to bring the eighties style computer wargame / crime planning element into the cover somehow.