The film Licence to Kill hit cinemas in 1989 and John Gardner was tasked with producing a novelisation of the film. This was quite a challenge – for Gardner’s Bond books were a continuation of the Fleming adventures and the film borrowed elements from short stories and – more notably – from the novel version of Live and Let Die. Felix Leiter should stay clear of sharks, for he is attacked in the same way twice during the course of Bond’s adventures although in this novelisation, Gardner has his artificial limbs removed rather than Felix’s actual limbs.

Although efforts are made to sit the novelisation into the world of the novels, there are some disparities and Licence to Kill is a slight oddball. It’s an enjoyable book though and I’m glad it was included amongst the recent re-prints of the Gardner novels.

Around a year ago, I got into a bit of a loop wherein I designed a number of ID cards. It started as I worked on a design for Geek Syndicate (which you can see over on the website). Having an appropriately sized template, I then went on to design ID cards for a number of different organisations – mainly fictional (and you can see most of them on my DeviantArt area). But naughtily, I decided to knock up my version of an MI-5, MI-6 and a UK “licence to terminate” card. I haven’t uploaded these anywhere. But thought I’d use the Licence to Terminate on this cover. I simply changed the details, added the film series’ MI-6 logo rather than having a QR code on the right and applied some artistic filters to an image of Timothy Dalton for the card’s Photo element. I then stamped “REVOKED” over the top.

In deciding how to use the revoked licence, I thought I would echo back to For Your Eyes Only. That title also referenced the bureaucracy of the Secret Intelligence Service and seemed a nice parallel. I found suitable elements to include on the textured wood background: a clip from a Walther P38k (which Bond uses in the novel instead of the PPK of the film), an extravagant crucifix to harken to the evangelistic cult that features in the book. Finally, using a spray paint brush which I later embossed, I added a pile of cocaine.

I wanted a prominent title so returned to a larger font in a three tiered approach. I tried to make the title look like metal lettering that was also (for some unknown reason) on the desktop! The font is Trebuchet MS. 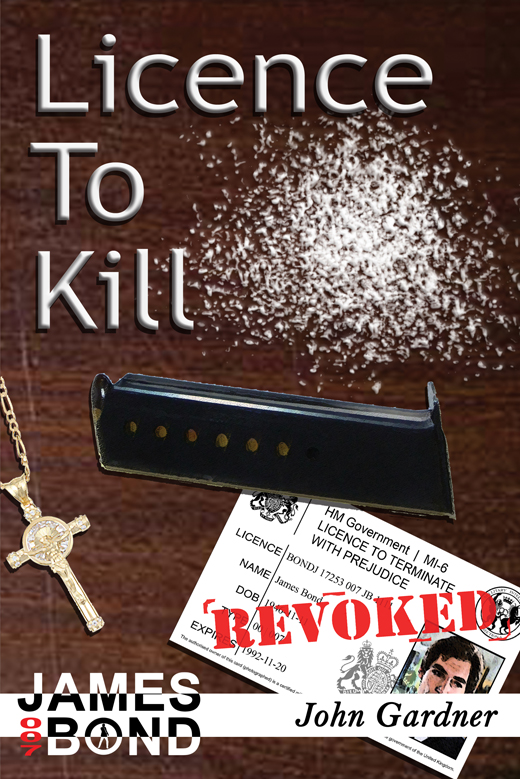 I don’t know why, but I fancied a solid background for the back and spine of this design rather than a continuation of the desk effect. I think in part, I was wary of the “cut off” effect that my earlier design for For Your Eyes Only had when I cropped elements to exist only on the front cover so as to not interfere with the text on the spine. By drawing a definite line between front and spine, this crop is (I think) less jarring on this cover.

I used the Trebuchet MS font for the blurb as well and brought the Revoked Licence over as the visual tie. I couldn’t find a suitable review quote to include on this novelisation, so rather limply added the “novelisation of the film” line.

Actually, I had the thought of including some kind of visual indicator onto the cover where books were novelisations of films (so for this cover, GoldenEye, Tomorrow Never Dies, The World is not Enough and Die Another Day). I thought maybe a little film reel on the spine above the publisher logo or something along those lines. But then I thought that making novelisations stand out was something of a dis-service to the books. I always consider them part of the range and making too big a deal about them being based on film-writers’ work seemed to jar in my head.

Thinking back, I perhaps should have gone with my gut and added a “this is based on the film” queue to the cover – an icon of some kind. Maybe not. I’m still of two minds!