Re-instated to active Royal Navy Service, Bond is promoted to captain and given charge of security for a multi-national naval action – a target for a terrorist organisation. The naval action is also serving as the base for a top-secret operation involving the United States, Soviet Union and United Kingdom. Add to this Gardner’s usual levels of intrigue and double cross and the stage is set for a thrilling adventure.

I wanted the naval / sea based plot to really be the focus of this cover. I had several goes at using the Through Deck Carrier involved in the plot as a focal point, perhaps with Harrier jets soaring overhead. Naturally, the Harrier had featured on existing editions’ covers so I thought I’d veer away from that.

Ultimately, the plot involves officers and dignitaries being shipped to the Royal navy fleet by Sea King. So that humble helicopter became my in. I found a ventral plan view, which I needed to flip and then remove internal lines. I could then add in the flags of the three major powers involved in the novels plot giving three symbolic representations.

I positioned these over a water texture that I made myself following a Photoshop tutorial I found online. To make the helicopters feel more solid, I added an embossed effect to them and then raised them above the ocean base with a drop-shadow effect.

For the title, I wanted a font that mimicked the lettering on a Royal Navy craft. The closest I could find was a model maker’s version of the RAF marking font. I added this in black with a white stroke to match how lettering appears on RN ships. To finish the title, I added a drop-shadow and then positioned it around (but under) the helicopters. The drop-shadow is closer to the text than that on the helicopters to help the multi-leveled effect of the design. 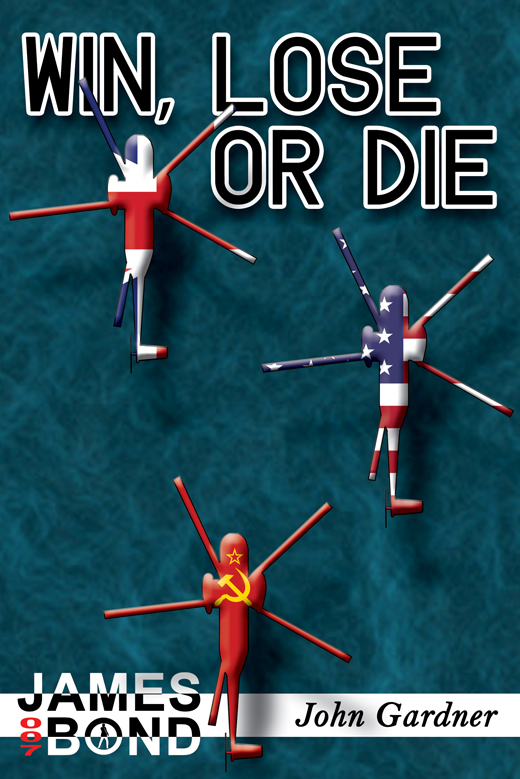 The RAF style font I used had an odd quirk. Not all characters were included. When it encountered a non-mapped character, Photoshop switched to Myriad and so I decided to use that font for the text on the back.

The novel pages on ianfleming.com have started to let me down … no quotes are offered for many of the later John Gardner novels. In the case of Win, Lose or Die, I did manage to find a quote from Kirkus Reviews. As with elements on the front cover, I added a drop shadow (from the top of the cover) to make it seem everything was flying above the ocean.

Speaking of which, I brought all three Sea King‘s onto the back and I quite like their single file positioning! 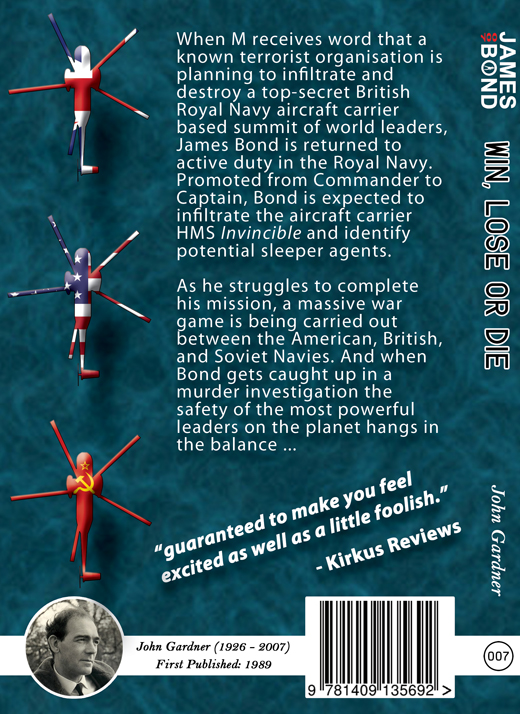 When I think about it, I don’t know why. But I actually really like this design. I don’t know if the average punter would be attracted to it as it is somewhat … bland, I suppose but something about it really appeals to me. This is one of the few covers that I don’t think I’d alter much on a second run through.