Scorpius is one of the first James Bond novels I ever read, but it had been a good twenty years between that read through and the recent one. The book is surprisingly relevant, dealing with the notion of the suicide bomber and – in this case – a cult leader who encourages a fanatical loyalty in their followers. There’s also a credit-card smart chip electronic-theft sub plot that gets somewhat lost amongst the main action.

I had a strong vision of what this cover would look like in my head and the end result … well, it’s actually quite different!

Originally I’d envisioned just a plain white colour with the Avant carte credit card in the centre. I then realised that the hard-cover edition of the novel went down a similar route – indeed it was, thinking back, the cover of the edition I first read all those years ago.

I still wanted the credit card to feature but I wanted a card that more resembled the simple, gold and white embossed card described within the novel. Also, from my re-read, I determined that the villain and the bombing campaign were perhaps more important to get across.

I decided that a silhouette crowd should feature to indicate both the crowd of cultists following Scorpius and the crowd at a bomb target. I found a  couple of suitable multi-tiered silhouette image using the usual creative commons search and added them – with some careful duplication to the bottom of the cover. A couple of flat explosions (taken from the ones I did for On Her Majesty’s Secret Service!) finished that element nicely.

I would represent Scorpius by using a pair of dark eyes (the villain is described as having eyes “as black as night” in the book) and the Alpha / Omega logo of his credit card would serve as a background element – I wanted it to seem like it was etched into a plain white wall.

I still wanted the credit card to feature – so the first job was to design it. I won’t go into the ins and outs of that here but I was quite pleased with the result. Naturally the card number had to end “007”! I chose Vivaldi as the font for the card’s name and used this in an embossed form for the book’s title too. 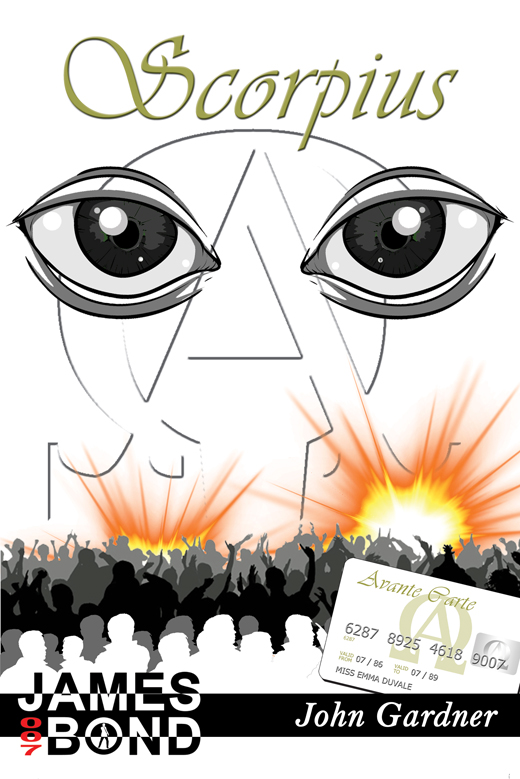 I wanted a sense of space, so positioned the blurb centrally on the back with a good margin to left and right. The quote, I decided to tilt slightly just for a slight bit of interest. For the source, I used the same Vivaldi font as on the title and credit card.

I have literally just noticed as I write this post that I completely forgot to add an image to this cover’s back. I’m not sure I mind the omission though. 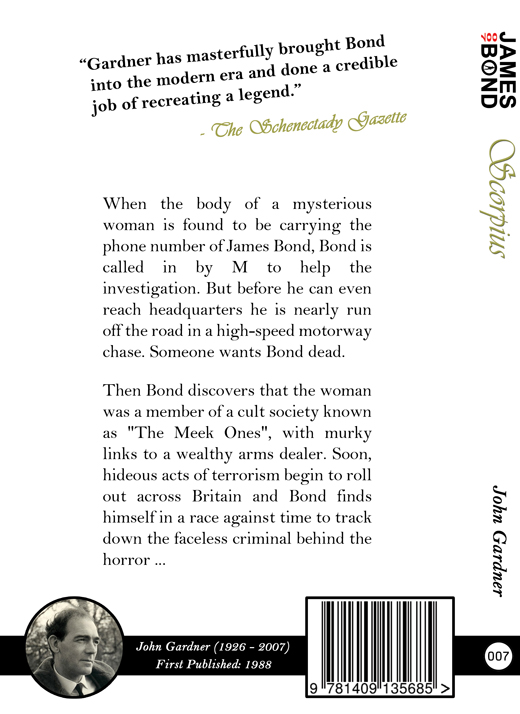 I think this is quite solid, despite an obvious error with the eyes staring out. I have clearly made one eye up and then flipped a copy for the second and this is obvious from the reflections shown on the iris of each eye.

I enjoyed the small challenge posed by designing the credit card for the cover and am still pleased with how that looks.